On InforXtreme there is the M3 13.3 release summary, what's new and BE release notes.

A highlight for me from 13.3 is the increase to 10 character dimension field.  Many sites I work with struggle to fit the information they want to store into the space available in the dimensions, so this is a great improvement.  A minor niggle is given we were looking at a fairly significant database change for this, it would have been nice to have moved to 15 characters for each dimension so we could post large item codes directly into the GL without using surrogate keys, but this is still a massive improvement.

The grower contract management module, discussed in its early stages of development at Inforum 2014, is also of interest.  This leverages purchase agreements and the QMS module for testing while the product is growing.  It also allows for provisional payments to suppliers and final payments based on receipt and testing. 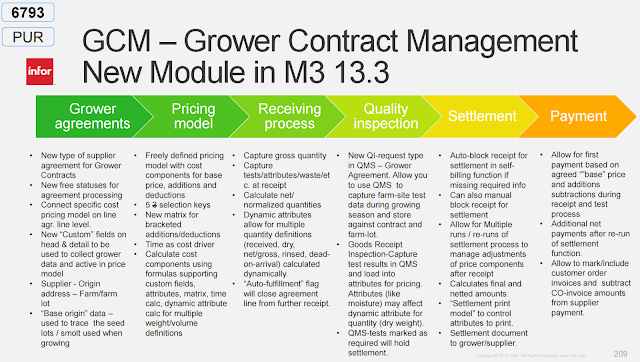 A minor but very nice change is price list identifiers are increased from 2 to 10 characters.  This is a very welcome change. 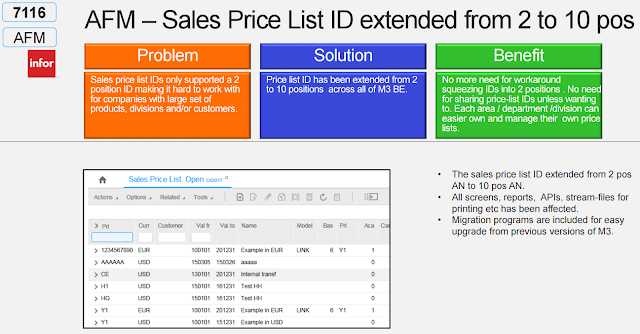 M3 on Linux
At Inforum last year, M3 running on Linux with PostgreSQL as a back-end was promised.  With M3 13.3 Infor have met this promise for the core M3 application.  The M3/Linux installation guide is up on InforXtreme for this.  This requires RHEL and Postgres Plus Advanced Server.  CentOS is likely compatible, if unsupported, and there is a 60 day trial available for Postgres Plus.  Time to fire up a VM and take a look.


With the 13.x series Infor continues to demonstrate its willingness and capability to invest in M3 to deliver new functionality to published and predictable schedules.